I have nothing constructive to say right now nor am I looking for anything positive or uplifting. Sometimes you just gotta indulge in some self-pity for a bit, especially when you're a chronic depress

As a civil litigator, my vote is to just stop caring. It helps a lot. I try my best and prepare the best I can. If I lose? Don't care. Not my life that gets impacted. If the judge or opposing counsel 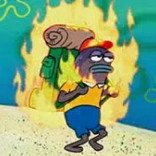 Consider taking a vacation MANDATORY especially if you litigate A LOT. It is exhausting to put in all the hard work, prepped annoying witnesses, skipped weekends, and pull all-nighters only to lose at